The Ruiz Brothers, Adafruit contributors, have come out with a new 3D printing project that Apple enthusiasts are sure to enjoy: 3D printed wristbands for the Apple Watch. The tutorial shows makers how they can create their very own DIY wristwatch bands using only a few simple tools, flexible filament, and of course a 3D printer.

The tutorial includes instructions for two different types of wristwatch bands: one Batman-inspired utility band, which can hold small tools and an audio adapter for the Apple Watch; and a simple, more design oriented band which features a hexagonal pattern. Of course, like with all Ruiz Brothers projects, they encourage makers to use their designs as a starting point but to add their own style to the make.

If you’re interested in 3D printing your own Apple Watch band, you’ll first need a few supplies. First off, an Apple Watch. Right? Once you’ve got that though, you’ll only need some NinjaFlex filament, and Apple Watch connectors, which can be ordered online for about €3. If you don’t have an FDM 3D printer handy, you can always reach out to a local 3D print service for the printing. 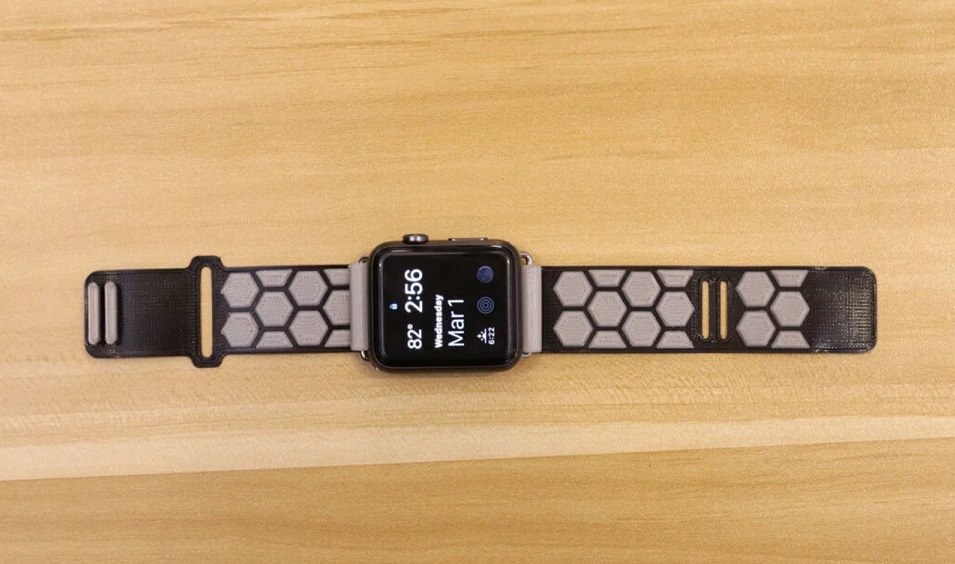 NinjaFlex is a flexible Thermoplastic polyurethane (TPU) that can be printed using most commercial 3D printers, making it an easy and accessible material to work with, especially for things like wearables. As Noe Ruiz points out, by 3D printing the watch strap using NinjaFlex, the 3D model can be designed flat, as the band was simply be wrapped onto the wrist after printing.

Anyway, once you’ve got all your parts, you can get going with 3D printing the wristband of your choice. The 3D models provided by Ruiz are fitted to his wrist (220mm in diameter) so if you need a larger or smaller size you can make that adjustment before 3D printing, as the band does not include sizing holes. Fortunately, he has included user parameters, so adjusting the size of the band should be a cinch.

If you are 3D printing the band yourself, here are some settings you can use as a reference for optimal printing with flexible filaments (provided by the Ruiz Brothers):

Also, if you are 3D printing the two-tone hexagonal band, you can either use your dual extrusion 3D printer, or, if you are using a single-extruder 3D printer, you can simply pause the print, swap the filament, and resume. If you have another method for two-tone printing, by all means, use it.

Once you have your band parts 3D printed, you’ll have to ready your Apple Watch for assembly. First, remove the original Apple Watch bands using their quick release mechanism. Next, install the 3D printed bands to the Apple Watch connector pieces (not yet attached to the watch). Be sure to install these in the right orientation with the bands, as shown in the photo. As Ruiz points out: “You'll notice each connector has three little "bumpers" across the stem. They're black on one side. On the other side, the middle bumper is gray/chrome. The side with the three black bumpers should be "face up" with the "top side" of the bands.”

To install the connectors, you’ll have to unscrew their tiny axles using a 0.8 Star Bit (or one of a similar size). Here, be careful not to lose the tiny screws. Once you’ve unscrewed one axle on each connector, you can simply install the watch bands onto them, and screw them back securely. Once both band parts are fastened to the connectors, just slide the connectors into the Apple Watch and presto, you’ve got yourself a new watch.

The wristwatch band features two small rectangular nubs that can be pushed through corresponding holes on the opposite side to fasten it around your wrist. As always, we can’t wait to see what the talented Ruiz Brothers come up with next!