3D Printing Outside the Frame: The Hangprinter Prints without Any Limits

Torbjørn Ludvigsen, a Swedish maker and RepRap builder, is raising funds to develop the Hangprinter, a suspended 3D printer that uses the walls and ceiling of a room as its “frame.” The unusual 3D printer can be used to print extremely large structures.

With 3D printing technology both improving and getting cheaper, experimentation with large-scale 3D printers is becoming more and more commonplace. There are now many giant 3D printers out there that can be used to fabricate houses, cars, furniture, and many other objects larger than your typical 3D printed Yoda head. But operating an extra-large 3D printer can be tricky. For starters, they’re obviously more expensive to buy or build than regular-sized ones. And getting a giant metal gantry into your laboratory/workspace/loft can cause its own problems. Luckily, there could be a solution to that.

Torbjørn Ludvigsen’s unusual Hangprinter isn’t intended to replace ordinary 3D printers, but it does offer an interesting solution to that last problem associated with giant 3D printers: fitting them somewhere. The Hangprinter, a RepRap of sorts, is a delta-style 3D printer with no frame. Instead, it suspends itself between cables attached to the ceiling, walls, and floor of whatever room it happens to be set up in, moving itself around using a system of computer-controlled pulleys. In other words, the Hangprinter turns an entire room into a 3D printer. 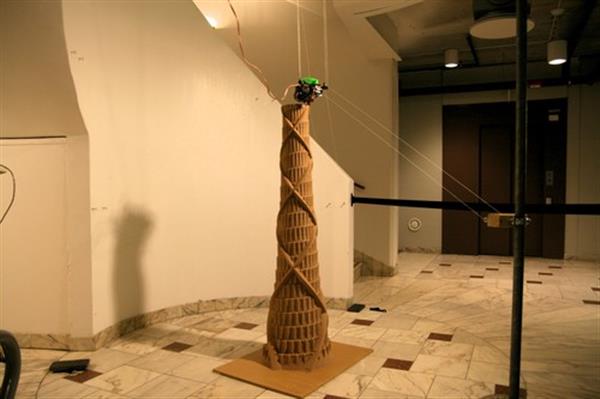 Usefully, the Hangprinter can be set up in just about any room—users just need to configure the 3D printer’s firmware in accordance with where they place the individual hooks and floor mounts. Once everything is installed and calibrated, the suspended 3D printer can move about three axes: along the Z axis, by pulling or giving cable from a ceiling hanger; and side to side, by pulling or giving cable from from three floor attachment points.

Since it can be assembled for just €230, it is understandable that the Hangprinter doesn’t offer incredible resolution (less than a millimeter, according to Ludvigsen). However, it is accurate enough to fabricate very large structures without posing a serious threat to their structural integrity. Fortunately, the resolution should improve when Ludvigsen reduces the weight of the printing unit, which he intends to do by adding closed-loop motor control and BLDC motors.

While Ludvigsen concedes that cable-driven 3D printers already exist, he says that his Hangprinter is unique in two ways. Firstly, it “utilizes arbitrary existing structures, such as insides of houses, as 3D printer frames.” And secondly, all parts of the suspended 3D printer are mounted on a single moving unit. “All the unusual design choices have been made with ease of build, ease of installation, and low cost in mind,” Ludvigsen says.

Ludvigsen is currently looking to raise money for the Hangprinter project. If he can raise a few thousand dollars, he plans to bring “Hangprinting to the masses,” which he will do by bringing in supply chain experts to keep the cost of assembly low. The project will remain open source, however, so that those interested in the project can attempt to build their own Hangprinters with modifications and improvements. 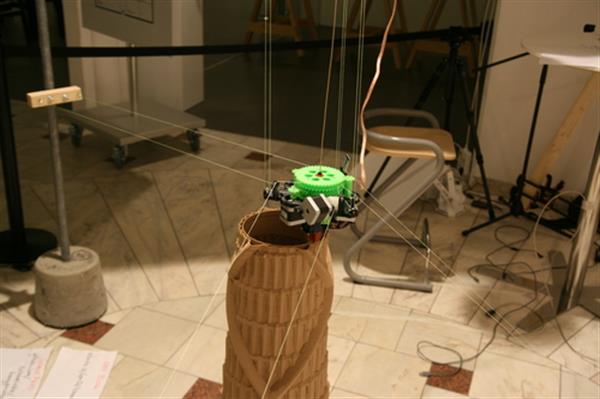 To demonstrate the potential of the Hangprinter, Ludvigsen is attempting to 3D print a model of the Tower of Babel, modeled in OpenSCAD, which currently stands at over 3.6 meters tall. If all goes to plan, the tower could eventually reach the five-meter mark.