How 5G will Forever Change Medicine Once it Reaches Hospitals

The 5G will open the door to a revolution in many areas, however it will change health in the way we know it. Thanks to the development of this technology, doctors and patients can be in different parts of the world, as was seen in the first operation broadcast live with this technology in Spain.

The doctor was in one of the stages of the Mobile World Congress (MWC) and the patient about four kilometers away, in the first operating room equipped with 5G coverage of Spain, at the Hospital Clínic of Barcelona.

This distance may seem small, but in the next few years, when 5G becomes popular, it can be extended thousands of kilometers.

"This was one of our dreams," explained the head of the Service of Gastrointestinal Surgery at the Hospital Clínic, Antonio de Lacy, who was on stage given instructions to the operating room team about a laparoscopic intervention they were performing.

The qualities of 5G are greater speed, greater data capacity and a brutal reduction in response time.

The latter is key in a surgical operation, since the transmission time is almost instantaneous, which allows greater precision. "This is not telemedicine," explained Lacy, who has preferred to use the concept of "telementoring", since the objective of this type of intervention with 5G technology is that a team is operating while an expert advises remotely. 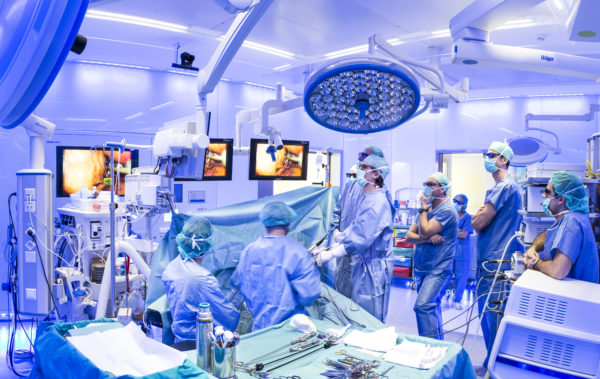 The surgeon present at the congress was able to communicate by voice with the team at the Clinic and draw on the screen in which the team saw the image of the laparoscopic camera inside the patient.

In this way, he indicated the most delicate tissues of the intervention and advised his team. Before the operation, the public was warned about the rawness of the images.

The technology used for the intervention was deployed by Vodafone, both in the vicinity of Mobile and in the Catalan hospital.

"It is very exciting, this technology will open a whole new chapter for health in the future, we are very proud to be the first hospital in Spain with this type of technology," said the director of the Hospital Clínic, José María Campistol, who also I found on the stage.

"Until now we have been connecting people, now we are connected things," said Vodafone network director Julia Velasco, referring to the 'internet of things' the term that refers to the interconnection of all smart devices and that will grow exponentially with the 5G.

Faced with more abstract or technical applications "this touches very close to the user," he added.

That difference that can be 5G between life and death, it is necessary that "reach the whole world, to be democratized," appealed the manager, whose company also participated in the project. "We want to make Barcelona an open laboratory for 5G projects, a year ago this was just one dream, today it has been a reality," said the director of the mobile congress, Carlos Grau.

"We are very proud of this case, because this technology will have a real impact on society," he added.

In addition to this project, during Mobile, which closes tomorrow, we have seen numerous applications of 5G in the field of health and emergency services, such as an ambulance connected to 5G and drones to control fires.