Spanish researchers have developed a prototype for a 3D bioprinter that can print functional human skin. They say the 3D printed skin is fit to be transplanted onto patients or used to test chemical products, cosmetics, or pharmaceutical products.

It might be a while before scientists are capable of 3D printing complex organs like livers, kidneys, and hearts, but until then there is still lots of important and exciting research to be carried out in the 3D bioprinting sphere.

This human skin is created using bioprinting and replicates the natural structure of skin at the epidermis with its stratum corneum, which acts as protection against the external environment, together with another thicker, deeper layer at the dermis. This last layer consists of fibroblasts that produce collagen, the protein that gives elasticity and mechanical strength to the skin.

The process to create skin for burns requires cells from the patient to grow and reproduce within the lab so there is sufficient time to create the skin. Cell production takes a couple of weeks, but once the cells are fully produced, it takes just two days to print the skin.

“We have demonstrated for the first time, that it is possible, through 3D printing techniques, to create a tissue, skin in this case, completely functional and therefore useable for transplants into patients or in another way, (for example) for drug and cosmetic testing,” said Jose Luis Jorcano, professor in UC3M’s department of Bioengineering and Aerospace Engineering. “(This skin) can be transplanted to patients or used in business settings to test chemical products, cosmetics or pharmaceutical products in quantities and with timetables and prices that are compatible with these uses.” 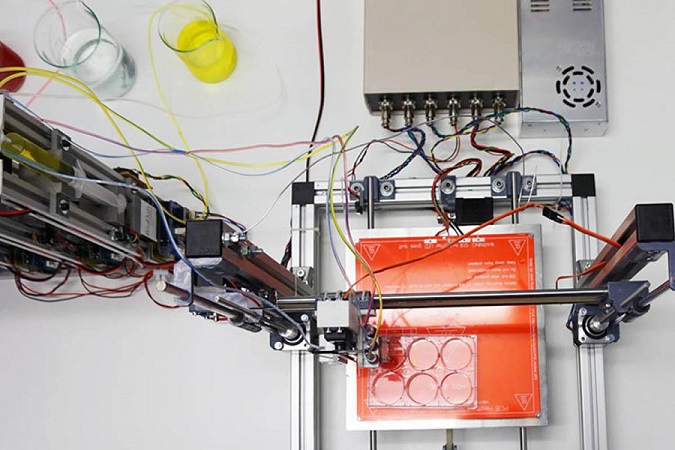 The bioprinter consists of three units. One of them is the programmable computer, which controls the bioprinter activity. The second unit is where the bio-inks are. While the third is the printing unit, where the bio-inks are ordered and create the tissue. Equivalent to coloured inks in a standard printer, the cartridges contain protein, cells and biological components which allow tissues to be created.

There are two differing processes for producing skin tissue with a bioprinter. The first is to produce allogenic skin, from a stock of cells, done on a large scale, for industrial purposes. And the second is to create autologous skin, which is made case by case from the patient’s own cells, for therapeutic use, such as in the treatment of severe burns.

"This method of bioprinting allows skin to be generated in a standardised, automated way, and the process is less expensive than manual production.”

“BioDan has been participating from the beginning in the research for skin created by the 3D bioprinter and will be the first company to launch a living organ made by bioprinting,” said Alfredo Brisac, BioDan’s CEO. “In this case we aim to develop (skin) that is capable of producing and growing its own hair and generate some other organs such as the trachea.