BigDog was a quadrupedal robot created in 2005 by Boston Dynamics, in conjunction with Foster-Miller, the Jet Propulsion Laboratory, and the Harvard University Concord Field Station.

It was funded by the DARPA in the hopes that it will be able to serve as a robotic pack mule to accompany soldiers in terrain too rough for vehicles, but the project was shelved after BigDog was deemed too loud to be used in combat.Instead of wheels,

BigDog used four legs for movement, allowing it to move across surfaces that would defeat wheels. Called "the world's most ambitious legged robot", it was designed to carry 340 pounds (150 kg) alongside a soldier at 4 miles per hour (6.4 km/h; 1.8 m/s), traversing rough terrain at inclines up to 35 degrees. 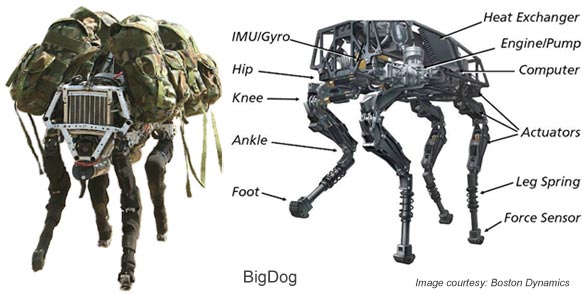 BigDog is a quadruped robot powered by a single two-stroke engine that drives a hydraulic pump, which in turn drives the hydraulic leg actuators. There are a few hobby RC air-planes available in the market which also uses gasoline powered engines.