Chocolate has long been one of the most experimented food materials in 3D printing. At first, the material would appear to be an ideal substance for 3D printing, as it softens at relatively low temperatures and solidifies at room temperature. Just slightly heat it and extrude, and voila, you have a 3D printed chocolate object Now researchers at the Singapore University of Technology and Design have managed to develop a process for 3D printing chocolate without the need for heat.

Chocolate 3D printing hasn’t been around for very long and belongs to a very niche part of the 3D printing world. That doesn’t stop it from advancing chocolatiers’ horizons, though. Normal chocolate bars are made by pouring melted chocolate into molds and letting them cool into a solid. This really limits the kinds of shapes you can achieve, since creating the chocolate mold is no easy task.

With a chocolate 3D printer, however, you can print some pretty crazy chocolate shapes, which would not be possible with a traditional mold.

Though not well-suited for mass production of chocolates, a chocolate 3D printer is ideal for those who want to customize, experiment, or just have fun with the art of chocolate.

The hot-melt extrusion method is widely used in 3D printed chocolates where the chocolate is required to be between the temperatures of 31oC to 36oC so that it can be melted and dispensed accordingly. While this method has its advantages in simplicity and accessibility, the narrow range of operating temperature can be highly restrictive and inflexible.

Conversely, cold extrusion does not require the manipulation of temperature as it depends solely on the rheology of printing ink that is added to chocolate at the operating temperature. However, due to the lack of inks possessing suitable rheological properties, cold extrusion in 3D printed chocolate has not been demonstrated to date.

The chocolate-based inks is printed  in the form of chocolate syrup and chocolate paste mixed with varying concentrations of cocoa powders.

The rheology-modified chocolate-based inks exhibited viscous and Herschel-Bulkley fluid properties, and they were printable using a DIW 3D printer without temperature control.

Ci3DP is complementary to currently available methods of 3D printing of chocolates based on hot-melt extrusion where the printing ink is heated and molten before patterning. Wide selection of chocolate-based materials, and ability to tailor their properties, distinguish our current approach as a unique method to 3D print chocolate-based products at room temperature.

How the Ci3DP 3d printing new process works in detail

The general scheme of Ci3DP is shown in Fig. 1(a). Chocolate-based inks were formulated by mixing syrup and paste with cocoa powder (Fig. 1(b)). We evaluated the printability of the chocolate-based inks in two terms: (1) rheological properties of the chocolate-based inks and (2) parameters of DIW 3D printing. The rheological properties of the formulated inks determined the suitability of the inks to perform cold extrusion. The formulated inks must exhibit shear-thinning behavior for easy extrusion through the syringes and nozzles, and form self-supporting layers after extrusion to maintain the printed structures (Fig. 1(c) and Supplementary Information). We confirmed that the dimension of the printed inks were maintained without spreading when the ink contained high concentration of cocoa powders. Commercially available cake icing was used without modification as a reference of a printable material with suitable rheological properties. Thereafter, the parameters of 3D printing were identified (Fig. 1(d)). A DIW 3D printer consisted of a dispenser and a motion control robot (Fig. S1). We identified the operating parameters for the successful 3D modelling of chocolate-based inks to ensure proper attachment between printed layers, and demonstrated fabrication of 3D models consisting of chocolate-based inks without temperature control.making. 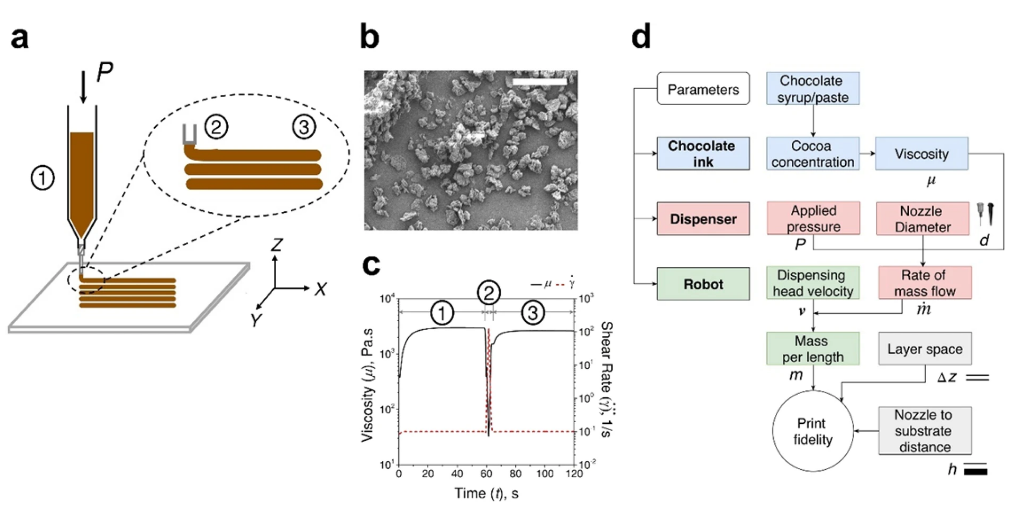 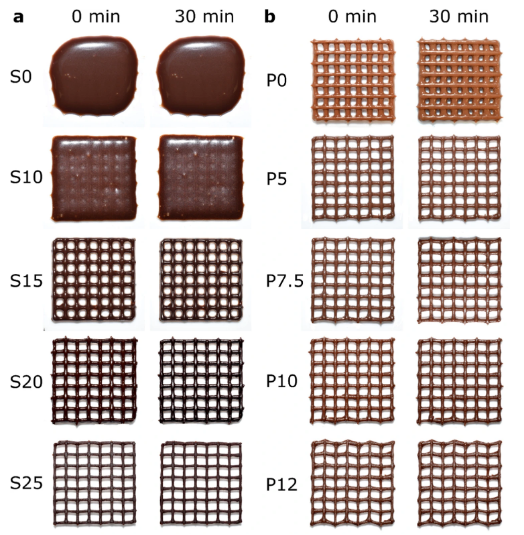 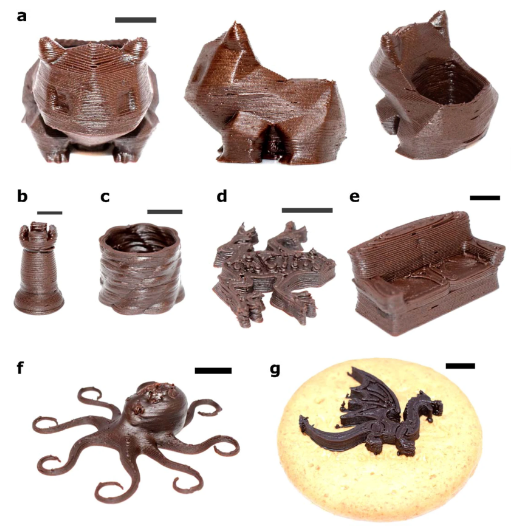 Multi-material Ci3DP the researchers demonstrated multi-material printing for Ci3DP using a DIW 3D printer equipped with two dispensing syringes (i.e. D1 and D2). They fabricated a 3D cone-shaped structure containing the liquid chocolate syrup as filling (Fig. 4). Figure 4(a) describes the steps to fabricate a 3D structure with filling. Briefly, a 3D cone-shaped enclosure was fabricated using one dispenser (D1), and the empty space within the 3D enclosure was filled with a chocolate syrup using another dispenser (D2). Finally, the remaining portion of the 3D enclosure was fabricated using D1. The final structure contained a liquid chocolate syrup as a filling (Fig. 4(b)). The inside filling can be observed once the enclosure was cut in two pieces (Fig. 4(c)). In this demonstration, we demonstrated that Ci3DP can be readily extended to multi-material food printing. Crucially, this work was enabled simple control over the rheological properties of the chocolate-based inks; two inks possessed different rheological properties at room temperature. The simplicity to prepare printable inks and fabrication of 3D structures at room temperature makes Ci3DP a unique method to perform multi-material food printing. Multi-material food objects consisting of range of liquid materials as fillings such as milk-based products (e.g. cream and yogurt) can be fabricated in a sequential manner using multiple dispensers. Ci3DP should be readily extended to fabricate multi-material food object with higher complexity and self-supporting properties conferred by the properties of the printing ink. 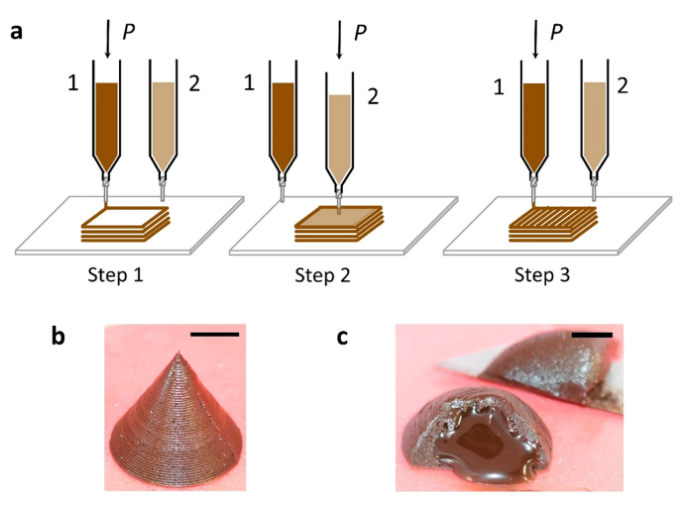 Multi-material food Ci3DP. (a) Schematic illustration of the steps involved in DIW of multi-food materials at room temperature. The sequence of steps allowed to print chocolate with an internal filling. (b) 3D structure of a cone-shaped enclosure containing a liquid chocolate syrup as a filling. (c) An optical image highlighting the liquid chocolate syrup flowing out of the 3D printed enclosure. Scale bars = 1 cm

Customized food in a wide range of materials

Ci3DP is flexible and should be capable of fabricating customized food in a wide range of materials with tailored texture and nutritional content. The effect of addition of varying concentrations of cocoa powders in chocolate-based inks on the textural, nutritional and sensorial properties are to be studied. This approach offers an alternative route of 3D modeling of food, especially when food ingredients or additives are sensitive to temperature. The use of multiple nozzles should offer interesting avenues to control distribution of the materials within the printed structure and shall find applications in the design of texture and controlled release of nutrients.