In Europe a steampunk park of Jules Verne’s dreams

Nantes (France) has brought to life the bizarre world of science fiction and steam technology. Les Machines de l'île is a combination ofart installations and amusement park, populated with steampunk creatures and inspired by the work of Jules Verne and Da Vinci's machines.

When you think of the French region of Brittany, many images may spring to mind: windswept beaches, medieval towns, plates of soft pink langoustines. A giant walking mechanical elephant, however, is probably not one of them. But this is exactly what visitors encounter at the Île de Nantes, a 337-hectare island in the centre of the city of Nantes, on Brittany’s western edge. 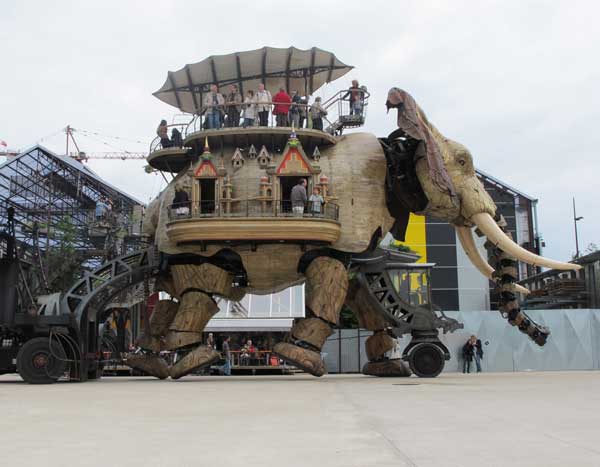 Inspired by Verne’s 1880 novel The Steam House, in which British colonists travel through India in a house wheeled by a steam-powered elephant, the ride gives passengers the chance to view Nantes’ warehouses, ships and 18th-century mansions from a unique vantage point 12m in the air – the equivalent of being on the third storey of a moving house. It also sprays water at unsuspecting observers.
Smaller machines are housed inside the soaring Galerie Des Machines (machine gallery), including a flying heron and a menagerie of prehistoric-looking metal bugs, spiders and other imaginary pedal-powered slithering insects, all fitted with seats for riders. 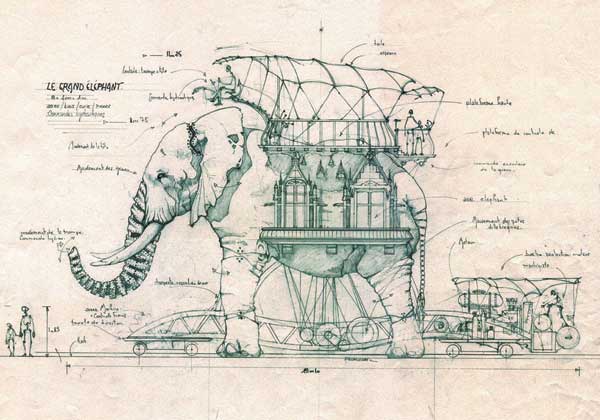 The absurdist feel of the Machines de L’Île doesn’t stop at the entrance gates, but seems to spill out into Nantes itself. Just down the street from the Machines, a comically oversized yellow tape measure that replaces millimetres with centimetres lies flung across a courtyard, as though it had fallen out of the pocket of the world’s largest architect.

In 2007, the $19 million Les Machine de L'lle opened in the hope of regenerating Nantes' deserted dockyards, which had been in decay since closing in 1987.
Backed by the local Metropole, the 337-hectare site is now one of the largest urban projects in Europe.
Free to the public, anyone can wander around the workshops filled with artists hammering and carving their latest creations -- though if you want to clamber on one of the marvelous animals, you'll need to buy a ticket.

The two co-authors of the project Francois and Pierre said: "The animals are conceived to be 'traveling machines' instead of big thrills entrainment, it's the desire to conceive a city through a common imagination, in which the public becomes an actor"

At Wittystore we like this project, if you want to discover more check the park official website at http://www.lesmachines-nantes.fr/en 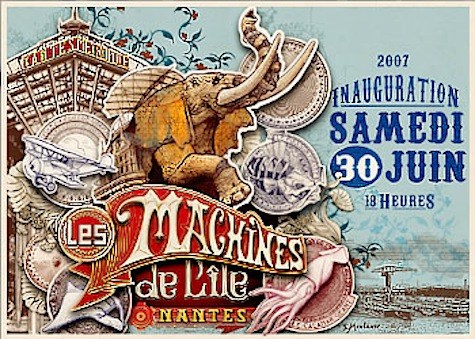