What is Nike Flyprint?

Nike Flyprint is the first 3D-printed textile upper in performance footwear. What it is not is a solution for footwear tooling, though that is something Nike has a long history with working in. At its most basic level, Nike Flyprint uppers are produced through solid deposit modeling (SDM), a process whereby a TPU filament is unwound from a coil, melted and laid down in layers.

However, it is antithetical to Nike to go a basic route. Instead, the Flyprint method allows designers to translate athlete data into new textile geometries. In this, it advances Nike’s efforts in digitally enabled textile development and adds to a legacy of proprietary modification (or hacking) of machines — a heritage that includes Nike Hyperfuse, Flywire and Flyknit — to achieve previously unimaginable performance solutions.

The process to develop the Flyprint uppers begins by capturing athlete data. That data was then computed (through computational design tools) to affirm the ideal composition of the material. Finally, that information was employed to produce the final textile. This operation speaks to the versatility (outputs can be wholly unique to athlete or function) of Flyprint textile, as well as the increased pace of overall design time. Through performance printing, Nike is capable of moving faster with unprecedented precision — prototyping is 16-times quicker than in any previous manufacturing method.

One interesting benefit of 3D textiles over traditional 2D fabrics is the increased dynamism made possible by adding an interconnection beyond a warp and weft; an advantage of Flyprint textiles comes in the fused nature of the material. For example, whereas in a knit or woven textile there is frictional resistance between the interlaced (warp and weft) yarns, in a printed textile, due to its fused intersections, there is greater potential for precision-tuned containment. It is also lighter and more breathable than Nike's previously employed textiles.

In terms of design pace, the advantage of Flyprint method in traditional textiles is two-fold: Specific lines of the material can be adjusted locally while preserving the global construction, and rapid iteration means testing and revision cycle times are trimmed significantly. In short, Flyprint allows for the highest-fidelity design with the greatest athlete benefit in the shortest time.

The textile also works seamlessly with many other materials, most notably Flyknit yarns, to provide an optimal balance of fit and structure. In fact, Flyknit yarns can be engineered to thermally bond with the Flyprint textile, eliminating any need for glue or stitching. 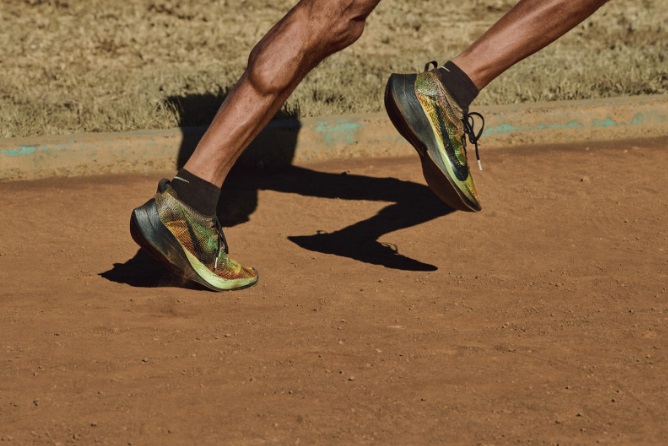 Eliud Kipchoge tested the shoe in Kenya during his latest marathon training cycle.

Nike Flyprint uppers are designed to help the world’s fastest distance runners run their fastest. And for that reason, its first articulation is in the Nike Zoom Vaporfly Elite Flyprint shoe. Created for Eluid Kipchoge, and driven by his feedback following last year’s Berlin Marathon and through a rapid-fire prototyping phase, the new upper improves the VaporFly Elite shoe and makes it 11g lighter than Kipchoge's original pair.