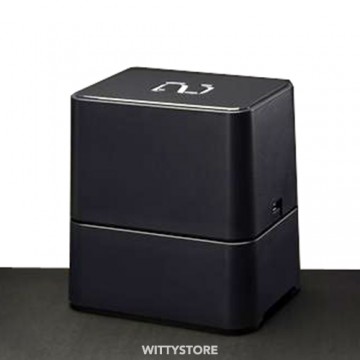 The ONO 3D Printer comes in the standard cardboard box. Resin NOT included.

The package contains the printer, a printing film with double-sided tape, a hex key for adjusting the base, a spatula for removing parts, a funnel for reusing resin, and a pair of nitrile gloves to keep your hands clean. A power adapter is not included, but ONO can be plugged into any USB charging device, including portable power banks.

ONO turns your smartphone into a 3D printer!

This innovative technology uses light from your smartphone screen to harden liquid resin into solid parts. ONO works with almost any iPhone or Android phone. Download the free ONO App on iOS or Android.

The ONO App is a social app where users can share models, designs, and tips. You can also send 3D messages to your friends, which can be revealed as a surprise through printing. The app will also tell you exactly how much resin you need to complete a print. Don't worry about pouring too much, because any resin that isn't hardened can be reused for future prints.

ONO was designed for everyone. The easy printer setup and intuitive app make it possible for anyone to print. Video tutorials help you get up and running quickly, and you can start your first print in 10 minutes!