The Best XYZ 3D Printer for Beginners and No-Tech Family

Priced at €230, the XYZprinting Da Vinci Mini sells at a bargain price for a 3D printer. The Mini is a small but well-equipped printer that is aimed at 3D printing beginner hobbyist, school teacher or small business product development team will get a simple machine that's intuitive to use and able to produce accurate, very good quality models and multiple builds at the same time. It really provides a more than satisfactory user experience.

Da Vinci Mini 3D Printer offers a lot of printing performance for less than €300, producing clean, attractive prints with only a few small details. The perfect setup provides the best balance between fast speed and good quality. The XYZprinting 3D Printer's low cost and high ease of use make it an ideal entry-level 3D printer for anyone.

The new da Vinci Mini 3D-printer comes with several features that are normally associated with more expensive printers, like embedded Wi-Fi, that allows users to transmit model files from their PC to the printer over wireless networks. It also has onboard data storage, which allows a maker to upload a model build file to the machine via a USB cable and then unplug and walk away as the machine constructs it. 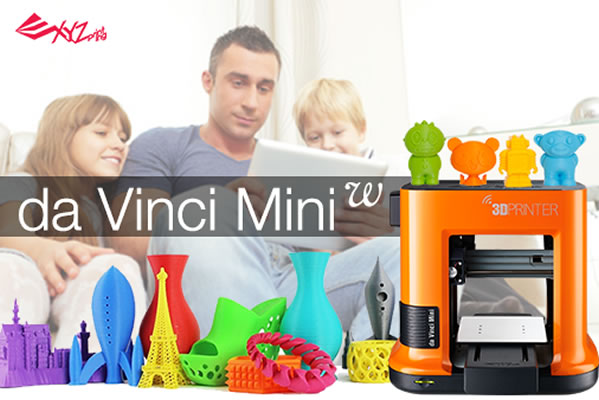 Another convenience feature of the da Vinci Mini is that it automatically levels the print bed before each print.

The Design is with its bright orange plastic case, a very colorful look, certainly stands out from the crowd of black/white printers colours. The case covers the workings of the printer and the extruder nozzle is located behind the extruder assembly and is hard to reach, helping to protect you from accidental burns. The Mini's print platform is also open-air and not enclosed with a transparent door like the company's other machines.

All functions are controlled from your USB- or Wi-Fi-connected computer using XYZWare, the company's proprietary management software. The da Vinci Mini has no controls on the printer itself and is compatible with Windows 7 and later, and Mac OS 10.8 and later.

And materials, this 3D printer works only with PLA filament from XYZprinting. If you try to install a reel of third party filament without one of the near field communication tags that accompanies a reel of XYZ’s filament, the printer will refuse to use it. Also, these tags indicate the color of the filament and a running total of the amount used of filament.

We did most of our testing, at least 10, at the good resolution, and printed two object at excellent. The Da Vinci Mini completed all the prints it started and had no operational issues during printing. Print quality was a bit better than with the da Vinci Jr. and of course, depending on the setting you use, the da Vinci Mini can be both a very fast and a very slow printer.

While slower than much expensive 3D printers, the Da Vinci Mini is also faster than its predecessor and is able to create higher quality printed objects. It is slightly less expensive than the Da Vinci Junior, I believe this 3D printer is a superior machine.

The XYZprinting da Vinci Mini 3D Printer obtain our Editors' Choice, it offers value for money and that is hard to beat.